Thanks to Matt Snaddon & Barry Smith

The club was established in 1906 as Hospital AFC, as a recreational outlet for staff at Porirua Mental Hospital.

Over a 50 year period, Hospital AFC became a feared name in local and national soccer. At a local level, it won the Venus Shield – the symbol of local soccer supremacy – 7 times, the Charity Cup 4 times, the Victory Cup 2 times, and the Power Cup 2 times. At a national level, it reached the Chatham Cup semi-finals in 1926, losing to North Shore in Auckland after extra time. It won the Cup in 1935, beating Christchurch’s Western 2-0. 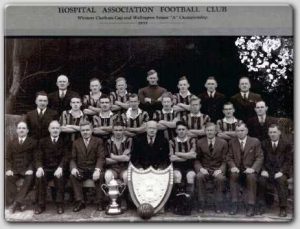 The name of the club changed to Western Suburbs in 1956, reflecting the growth of Porirua and Tawa, from which the club drew its playing strength.Eight players were selected to represent New Zealand – George Hughes, Bill Skinner, Joe Kissock, Joe Todd, Ernie Jeffery, Willie Woods, Roy Coxon and George Dick. Bill Hicks, the founder of the club, was chairman of the WFA from 1928 to 1938, as well as secretary of the NZFA.

WESTS – Back then
The club struggled for success in the late fifties and early sixties. However, at junior level, the club became a formidable force, with over 35 junior teams each season. The late sixties and early seventies proved to be a brilliant period for the club. It won the Central League First Division title in 1968 and 1969, in the league’s inaugural seasons, under the guidance of Hungarian coach Imre Kiss.

Due to the 1969 success, the club qualified for the first season of the National League in 1970. While the club struggled in National League, eventually being relegated at the end of the 1971 season, it performed well in the Chatham Cup, losing the 1970 final after a replay, to Blockhouse Bay, and winning in 1971, 3-2 against Wellington City. During this period, two players were selected to represent New Zealand – Dave Wallace and Allan Jeffery. Dave Wallace became the first New Zealand born player to captain New Zealand and Allan Jeffery followed in his father Ernie’s footsteps in representing New Zealand.

1970 CHATHAM CUP FINAL
The 1970 Chatham Cup final created history for a number of reasons – it was the first time a cup final had to go to a replay and the replay in Auckland was the first time the cup final had been played away from Wellington. The final saw the winner of the first national league competition Blockhouse Bay play the bottom club Western Suburbs. The first final was played at the Basin Reserve in front of 10,000 spectators.

Western Suburbs upset the form book going out to a 2-0 lead with 5 minutes to go. Blockhouse Bay snatched two late goals, including a penalty, to take the game to extra time. There was no further scoring and the game went to a replay in Auckland a week later. The replay was an epic affair like the first. Each time one side did something, the other would reply immediately. With 10 minutes to go, the scores were locked at 2-2. Western Suburbs threw everything at Blockhouse Bay, Bruce Baker nearly scoring a third and decisive goal with a bullet-like header from a corner. The heroics of John Morris in the Blockhouse Bay goal prevented Western Suburbs from taking the lead for the first time in the match. A few minutes later Western Suburbs thought they had scored the third and winning goal, when Dave Wallace finished off a sweeping passing movement that stretched the length of the field.

To the amazement of players and spectators alike, the referee disallowed the goal after being ushered to the sideline to talk to the linesman. For the first time in over 30 years, there is conclusive video evidence that the Western Suburbs goal was not offside and should have counted. The cries of “We Wuz Robbed” by Western Suburbs supporters after the game, are now vindicated. Despite the decision, Western Suburbs searched valiantly for a winner, exposing themselves at the back. They paid dearly for this in injury time when Blockhouse Bay scored a third from a cross. 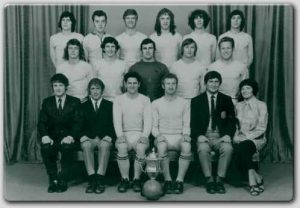 PORIRUA UNITED – As time was to prove, the move to change name was a mistaken one as it alienated large parts of the club’s catchment area, and resulted in the formation of rival clubs.Western Suburbs made up for the disappointment of losing the 1970 Chatham Cup final a year later when they beat local rivals Wellington City 3-2 after extra-time on one of Wellington’s windiest days. Barry Humphreys cross-come-shot secured victory for Western Suburbs with 2 minutes remaining of extra-time. Unfortunately this team went on to get relegated from National League. Following this the name of the club changed to Porirua United, reflecting Porirua’s new city status.

At the end of the 1983 season Porirua United and Viard amalgamated to become Porirua Viard United.

PORIRUA VIARD UNITED – another name, more titles. Viard had enjoyed an impressive period of success in both men’s and women’s soccer. On the men’s side Father Eidhof and Tom Thomas were guiding hands, driving the club to one title after another. On the women’s front, Viard competed fiercely with Miramar for soccer supremacy, winning the Kelly Cup in 1981 and 1984.

Porirua Viard United proved to be a competitive force in both men’s and women’s soccer. One of the club’s players, Heremaia Ngata, secured a professional contract with Hull City in 1988. Five women players were selected to represent New Zealand – Tina Salu, Julie Inglis, Rebecca Roche, Pauline Sullivan, and Kim Nye. The women’s team were joint National Champions in 1987, drawing the grand final with Auckland’s Eden.

At the end of the 1992 season, Porirua Viard United amalgamated with Mana United, forming Western Suburbs. Mana United, over its 20 year history, had established a reputation as the best junior soccer nursery in Wellington.

WESTS – same name, new attitude The rebirth of Western Suburbs saw a return to the heady days of the late sixties and early seventies. The club won the Central League in 1996 and 1998. Wests participated in the North Island League in 1999.

Western Suburbs then won the inaugural Capital Federation Premier League in 2000 and went on to win it again in 2002. Following this victory they went into the playoffs for promotion into the National League. They easily disposed of Havelock North from the central region (11-0) but failed to win the subsequent playoff series.

In 2003 and 2004 the club performed well losing only 3 and 2 games in each season. However it was not good enough to win and only second and third placings were achieved in the Capital Premier Competition.

2005 saw the return of a Central League. Again Western Suburbs became champions. A late run of losses once they had already won the title was a disappointing way to end an otherwise outstanding season. The team was controversially knocked out of the Chatham Cup in the 3rd round for fielding an ‘ineligible’ player.

2006, the centenary year of the club, has been a special one. A slow start to the Central League campaign unfortunately meant the club failed to retain their title, and finished as runner’s up. However it was in the Chatham Cup that Wests excelled. A run of home draws certainly helped but to win a final in Auckland was always going to be tough. Some penalty shoot out heroics from goalkeeper Phil Imray and some composed penalty taking saw us win 3 nil on penalties and win the Chatham Cup for the first time since 1971. A civic reception and awards followed, Porirua City’s Team of the Year and Premier (overall) Award, which have topped off a wonderful celebratory year for the club.

Dutchman John Kila took the helm in 2010 and guided Western Suburbs to a 6th place Central League finish. John returned to Europe at the conclusion of the 2010 season and subsequently become the Technical Director of Feyenoord Fetteh Academy in Ghana.

Shane Rufer was installed as Head Coach for the 2011 season who, along with assistant Lloyd O’Keefe and manager Ken Hill, built a young team, including experienced imports from England and Japan. They produced some excellent football, challenging eventual champions Miramar Rangers for most of the season. Only a late season drop in form saw their push for the title falter to finish fourth.